Alagón, once a market town in the Kingdom of Aragon, is dominated by the silhouette of the San Pedro Apóstol parish church, one of the treasures of the Aragonese Mudejar, which bears a stylistic resemblance to two other highly unique monuments falling within the classic Aragonese Mudejar category: the church of San Pablo in Zaragoza and that of Santa Maria in Tauste. The structural and decorative elements of all three are similar, forming a uniform group linked to the Ribera Alta region of the Ebro River and its catchment area.

The exact timeline of its construction is unknown, but Professor Borrás dates its origins to around 1300, based not only on stylistic elements, but also on historical events in which the building played an important role, such as when King Alfonso III summoned the Royal Court in June 1288, or as the backdrop to the wedding between Pedro IV the Ceremonious and his first wife, Maria of Navarre, daughter of the king and queen of Navarre, in 1338.

The earliest Mudejar feature of the church is the present-day nave with its polygonal apse, five-sided on the exterior and semi-circular in the interior. According to some theories, it was built on the site of a previously existing mosque.  Standing freely adjacent to the southwest corner is the octagonal-plan bell tower. The interior structure is typical of Almohad minarets, namely featuring a narrow inner tower divided into rooms covered with a spherical cap, surrounded by a spiral staircase covered by small brick vaults consisting of narrowing courses of bricks. The exterior of the tower has no buttresses and boasts clean edges, its decorative elements arranged into three bodies that exhibit the classic ornamental repertoire in protruding brick highlights.

As the capital of the Ebro River’s Ribera Alta region, located between the Canal of Aragon and the Jalón and Ebro Rivers, Alagón’s fertile lands drew Jewish, Muslim and Christian communities to settle there. Alagón’s heritage reminds us of the importance of this city throughout history. One clear example is the ancient Iberian settlement of Alaun, located in present-day Castile, which explains how Alagón was the easternmost city in the Vascones territory, and even minted its own currency with alphabetical inscriptions.

Another artistic jewel of the city is the fresco painted by Francisco de Goya in 1765 on the vault over the staircase in the Casa de Cultura.

The chapel of Nuestra Señora del Castillo, built in the 16th century next to the Muslim castle, and the ‘El Caracol’ nature area, with its views of the aqueduct built in the 18th century to enable the canal to cross the Jalón River, are both worth a visit.

The Nuestra Señora de las Mercedes sugar factory, one of the earliest sugar factories in Aragon, is an example of industrial heritage. And in terms of civil architecture, the building in Calle Jota Aragonesa 3-5, a noble residence from the modern era (16th century), was commissioned by the prothonotary Filippe Climent.

The town has been a registered member of Territorio Mudéjar since January 2019.

Alagón in the social media 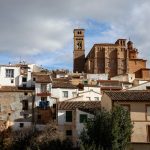